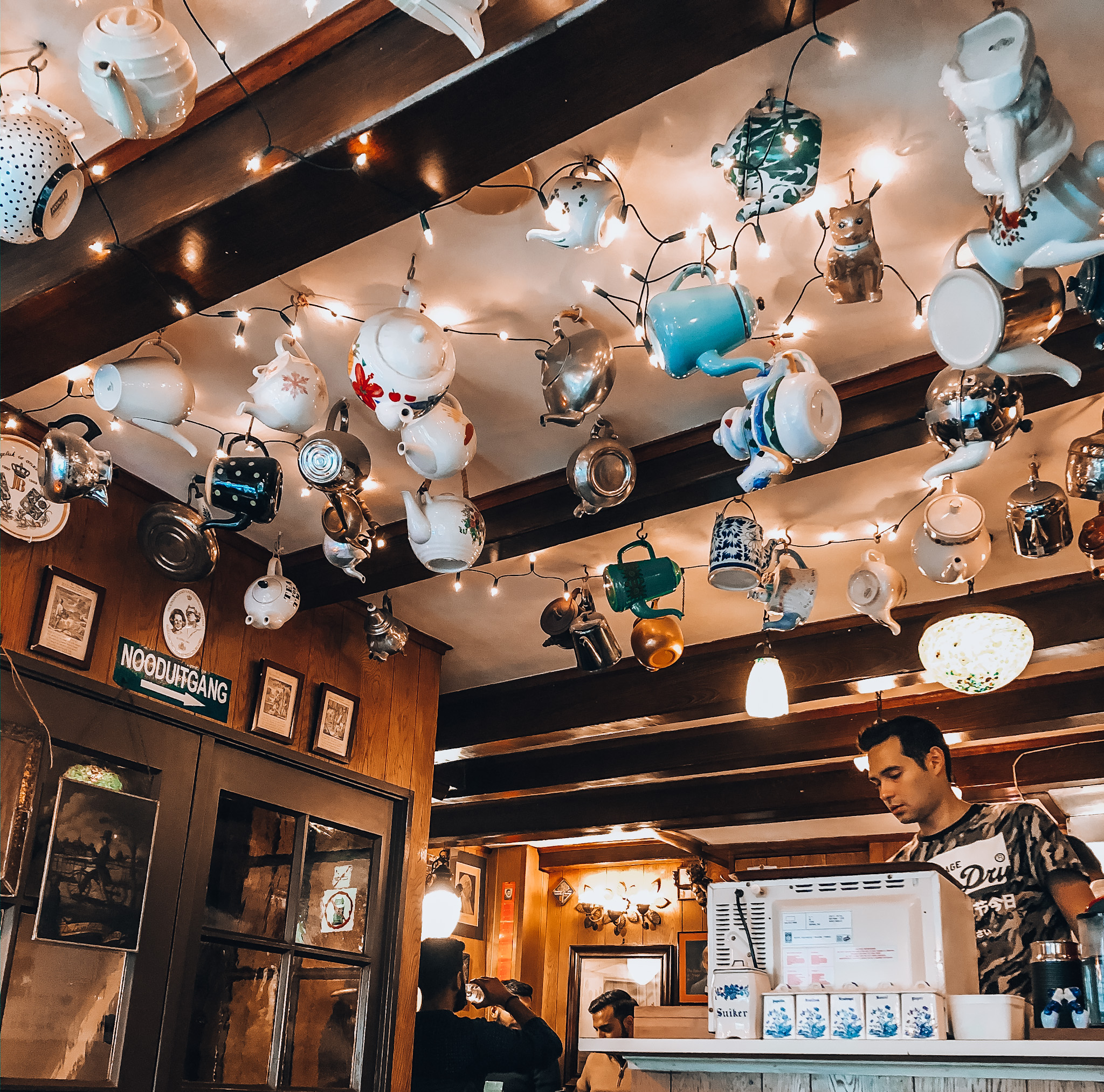 As far as foods-to-try go, we were still missing two things: dutch pancakes and Poffertjes, which are like small fluffy pancakes. The first time I had heard of the latter was while watching The British Baking Show. It was one of their weekly challenges and ever since I’ve been wanting to give them a try.

So that was the plan for our last half day in Amsterdam. We couldn’t take too long since the next stop in our amazing EuroTrip is the city close to Amsterdam, Delft, to stay with my cousin for a few days.

The plan for the day was to head to Pipj to check out the market that was closed the day before. We knew for a fact that this was where we’d get to try warm, freshly made Poffertjes. And as for dutch pancakes, well you won’t fool me twice! After not booking ahead of time for the museums, we made sure to make reservations the night before for a cozy, hard-to-get-a-table dutch pancake place called Pancakehouse Upstairs. Remember this one as well guys. And last but not least, we also decided to go on a boat ride around the canals. It was a sunny beautiful day, perfect for the boat.

JP and I headed out quite early. Tons to do and such little time! Let’s start with the market. Well, I love a good market. So it’s a given that I also loved this one. There was a lot of food, beautiful merchandise, and lots of people with cute dogs. So yeah. Happy place. And just like we predicted, it didn’t take long to find someone making the Poffertjes.

Now, for some darn reason I tend to like starting random conversations with strangers. I don’t plan it. It just happens. If there’s a little silence, I’ll blurt out something that pops in my head. So we went up to the lady making the little pancakes, asked for one (which comes with 10 little pancakes) and also requested nutella on top, obviously.

As the lady started working on her little masterpiece, I thought it would be a good idea to mention that I was so excited to try it ever since I saw it in the British Baking Show. The lady barely acknowledged me and kept making the little pancakes. At the time, I didn’t think much of the comment. But later I learned that apparently people are not a huge fan of British tourists. At least that’s what I kept hearing. Didn’t know that and don’t know why either. Whether it was the fact that I mentioned the British Baking Show, or that she really didn’t feel like chatting, I’ll never know.

Were the Poffertjes any good? I’ll answer you with another question. When is something with nutella not good? It was perfect! Fresh, warm, and decadent! They even add a little dutch flag on a toothpick to decorate. Like I said, a masterpiece.

We didn’t eat anything else in the market because I wanted to make sure that my appetite was intact for that much talked about pancake place. We finished the market then went walking to the anticipated Pancakehouse Upstairs.

If you’re curious about the name, well it was exactly that. You have to go up these stairs to get to the place — correction, it was more like a ladder. The Pancakehouse Upstairs is a small, cozy place. I believe there were only 4 tables in the entire place. Hence why you need the reservation. But it’s like a place right out of Alice in Wonderland! There were tons of tea pots hanging from the ceiling and pretty lights everywhere. And the music selection was also amazing. Which as you know, good music always gets me going.

When ordering something like pancakes, JP and I like to order one sweet and one savory and split. So the savory option that we decided to go with was brie, honey, and bacon. The sweet one was their special: pancake with dutch stoofpeertjes and cream. What this is, is basically poached pear in red wine and spices like clove and cinnamon. It’s a traditional seasonal special so we decided to try it.

Typically when a place is super popular for something, it tends to disappoint me somehow because I go in with these amazing expectations. Didn’t happen here. Nope sir. It was worth every single little gluten-filled bite! Both savory and sweet, were oh so good! And if you’re wondering how different can a pancake be? Especially since you can brunch over pancakes just about anywhere here in the U.S. Well, dutch pancakes are quite different than the American ones. The dough is much thinner and tastes different. Definitely a unique experience. So add this one to your list!

And finally, to wrap up Amsterdam, we jumped on our boat ride to see the canals and houses from a different perspective. The company we used is called Lovers Canal Cruises. It’s not a romantic experience, if that’s what you’re wondering. JP and I couldn’t help but smile a little at the name. What if you’re not lovers. Is it still acceptable to ride in the Lovers Canal Cruises? The cruise was a lovely experience. It was a beautiful, sunny day and just perfect. They also include headphones and as you explore, there’s an audio giving you some history about the buildings and The Netherlands in general. I don’t know about you, but I do find history fascinating.

It was now time to head back to the hotel, pick up our bags, and say goodbye to the first chapter of our journey: Amsterdam. We took the tram back to the train station. No incidents this time when getting out. Wohoo! And bought our tickets to Delft. But before getting on the train, we just had to try their hot food vending machine. That’s right, they have vending machines with hot croquettes and even burgers. We bought a cheese croquette and boarded the train. It was pretty tasty!

The ride to Delft was about an hour. Unfortunately we weren’t able to site-see much because it was already dark. But the ride was very smooth and pretty pleasant. When we arrived at the station, Meissa was already waiting for us with her hubby. They drove us to their place and made the most delicious dinner. We ate, drank, and caught up a little. But how do you even begin to catch up after so many years. Meissa and I relived quite a few of our childhood stories and it just warmed my heart to no end!

Midnight came around and it was time for bed. We had an early day the next day so rest was a must. Next stop on our trip, drive to Bruges in Belgium.

This site uses Akismet to reduce spam. Learn how your comment data is processed.